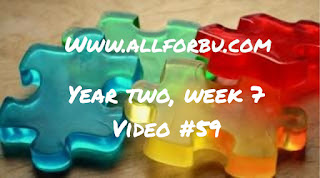 In this video:
*OFFICIALLY started ABA this week!
*A couple scheduling hiccups…
*FINALLY got an appointment to see a neurologist at the Children's hospital!
*started anticipating (and fearing) the B12 injections
*Gemiini
*Plan in place to get rid of iPad altogether until ABA can implement a schedule
*really liking French nursery rhymes for some reason?
*had a great week in therapy overall, even in spite of a messy reaction to an unpreferred texture on sensory day
*the theme of the week was "Rolling With The Punches!" and boy, did he!


I forgot to mention in the video that Bu the Gymnast is taking so long to fall asleep lately because he's taking bedtime to practice his tumbling and handstands! It's actually quite impressive how good he is at it, even if it is a little scary to watch him do it. We're encouraging him to do it as safely as possible, of course, but I'm looking forward to working on his instruction-following in ABA so maybe in a few months, we can put him in a gymnastics class!


Posted by The Crunchy Spectrum/All For Bu at 6:37 PM