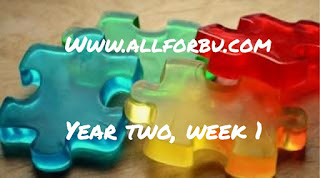 In this video:
*back on prescription Carnitor
*probiotics experiment (more on that next week **EDIT** here is the link!)
*sleep update
*not interested in proteins this week…maybe he's bored?
*pediatrician visit…(he's now 40.5 inches tall and 36 pounds…finally growing!)
*Med Waiver update
*asking for juice by gesturing!
*"singing"!
*upcoming holiday weekend and MAPS appointment before the next video!


I forgot to mention in the video that he's been doing SO GREAT with changes in routine lately, particularly with going places after therapy rather than straight home! He doesn't mind if I take different routes (which used to be a huge trigger before) and he's been great about going into stores with me, etc. SUCH HUGE PROGRESS!)

I also forgot to mention (though you can see it at the end of the video), Bu got on a big-boy swing for the first time ever this week!


Posted by The Crunchy Spectrum/All For Bu at 2:27 PM