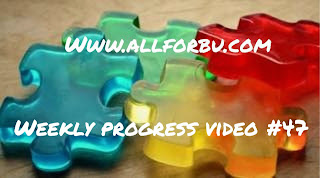 In this video:
*B12 patch now on Saturdays instead of Fridays
*Had to cancel therapy once in the last week because Bu is sick AGAIN, though finally feeling better
*Boosted probiotics and boosting CoQ10
*some possible speech progress, and definite physical/strength progress
*OT reevaluation, new goals

I forgot to mention in the video that his OT mentioned the possibility of color-blindness during the reevaluation…he's always gravitated towards blues and yellows and ignored reds. When we were discussing it and realizing that it's a consistent thing, we came to the conclusion together that it's a real possibility that he might just be perseverating on his favorites, but he ALSO could be ignoring reds because he can't see them. Reds just appear brown/gray to a person that's colorblind. Not sure how we'd go about finding out or if it really affects anything, but I thought I'd mention it.


Posted by The Crunchy Spectrum/All For Bu at 3:08 PM