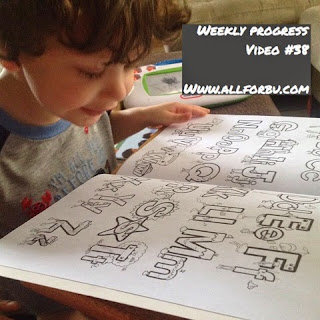 There's a lot going on this week, but it's been mostly good, so we'll take it!

Please be sure to check out the Jewelry In Candles Fundraiser for Bu's medical expenses, or you can donate directly at our GoFundMe here. Thank you!

In this video:
*Geneticist FAIL
*collecting specimens for stool test this week, prepping for rest of labwork
*switched magnesium back to glycinate
*added l-theanine and l-carnosine this week
*starting Leucovorin this weekend
*surprised me by doing well with a new therapist
*consistently waking up once a night, decided to have a party in the middle of the night this week
*Starting the ABA process
*Discovered the Preschool Prep alphabet

Posted by The Crunchy Spectrum/All For Bu at 2:30 PM