Here's some stuff you should know to clarify what's said in the video:

1) Bu is 3 years old, he's on the GFCFSF diet, and he's on the autism spectrum. He doesn't speak (yet), is very sensory seeking (except for touch/tactile), and has hypotonia, which is low muscle tone. He is getting better with all of these things, but he cannot stand or walk for very long without getting fatigued, so he is carried or strolled more than a typical kid his age.

2) Bu gets his supplements several times a day in his "juice", which is typically a homemade, organic fruit-and-veggie puree mixed with water. This is why I personally bring organic baby food pouches or jars/tubs with us to the parks.

3) I took the supplements in "pill organizers" to the park, which was then put in my backpack. If we'd have stayed longer, I might have taken our refrigerated supplements with us and kept them at the hotel. When they would have NEEDED to come with us (such as, after checkout on the last day), I would have taken a separate lunchbox and filled it with ice at the hotel to keep it cool. I also would have added more ice at the parks (asking for free cups of water with lots of ice at any counter service restaurant!).

4) Bu is VERY picky about his chips, which is why I made a point to bring a big bag for each day into the park. At Animal Kingdom (I didn't notice at any other park), they had a booth that sold gluten free and vegan foods, which would have been great for Bu provided I also found a soy-free choice…but a SMALL bag of chips (which wasn't the kind Bu even likes) was SEVEN DOLLARS. Crazy.


Please comment or email me with any questions and I can either answer based on my experience, or I can find out for you. We have annual passes so if there's something in particular that can only be answered at the parks, let me know and I'll do my best to ask or find out next time we go! 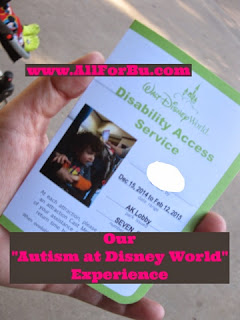 Posted by Momma Friendly at 1:05 PM