...of tapering off screen time.

We had a whole 15 minutes before the first tantrum. That's actually longer than I expected him to last! Especially since I was asking him to do OT activities with me during that time. 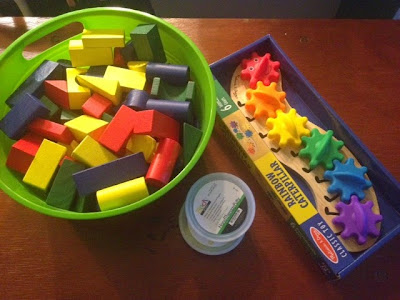 I opened the gear puzzle (he hasn't seen it in MONTHS) and he immediately put the colors where they belong (not on their pegs, but in order) with the exception of a couple "good try"s.

The putty was an absolute NO GO. lol Poor guy! I showed him the stiffer one first and he was icked out, but he was absolutely avoiding the goopier one at all costs. That activity didn't last very long.

Lastly, I stacked up some blocks and counted down to "BOOM!" (knocking them down). He helped me knock down a couple of towers but wasn't interested in helping me stack. He DID, however, help me pick up ALL the blocks off the floor, hand over hand, with ZERO resistance. I sang him the clean-up song and he got right to work (with my help).

He was very proud when I praised him, and he even got some of his favorite potato chips when we were through. He's moved on from his teeny tantrum, and we're now at about 25 minutes straight with no tv.

This is going to be tough. But he's capable. I just have to remind myself that I am, too.
Posted by The Crunchy Spectrum/All For Bu at 7:16 PM